The workshop, organized by Salvo Pappalardo (Studio AION) and Andrea Graziano (Co-de-iT), focuses on the development and management of relationships between information and geometry for condition-specific building envelope systems. Through visual scripting in Grasshopper (generative modeling plug-in for Rhinoceros) participants will learn how to build parametric data structures (from basic lists to complex data trees) and how to set up data-driven geometries in order to develop envelope systems and eventually to extract and organize information relevant to the manufacturing process. For more information, visit the following website. 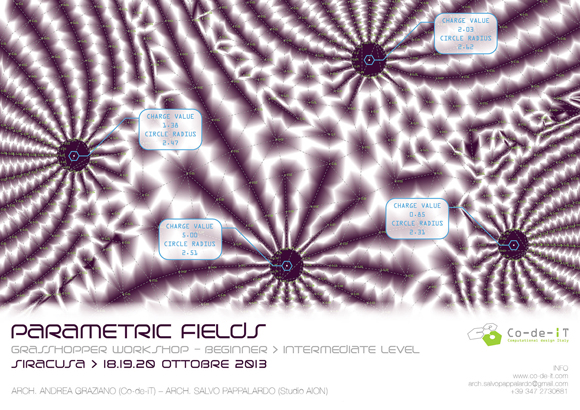 Our first solo exhibition was inaugurated on July, 18th in the Wroclaw Museum of Architecture in Poland. It will remain open to the visitors till September, 8th 2013. The featured projects are set within the context of the Paper Dragon spatial installation which will soon be featured on our site. In the meantime, we publish an extract from the introduction to the exhibition catalogue and a couple of images from the opening:
“ The exhibition and the catalogue present seven projects of AION. (…) It is not the form, but the logic of formation that is common in each of them. Therefore, to show the development of individual concepts, besides the final versions of the projects, we also present the diagrams and sketches illustrating the course of metaarchitectural search. The core of the exhibition and the element organizing the space of Archi-box is a Paper Dragon. The structure made of over a thou- sand cardboard elements and resembling an origami puzzle is inspired by tessellations designed by an outstanding mathematician Ron Resch. His research carried out in 1960’s and 1970’s allowed for the first time to describe three-dimensional structures with the polygonal grating. Similarly to the other projects of AION, it was possible also this time to combine in one project two seemingly contradictory elements: high- and low-tech. The structure which was designed with the use of advanced digital techniques was made by hand, using the simplest methods and materials, and created eventually an extremely beautiful synthesis of abstract domain of mathematics and material world of craft. “ (Michał Duda, Curator of the Exhibition)

For more info on the Muzeum page, click here.

The first impressions from the exhibition can be found on the Blog Aranzacyjny.

The instructions on how to make a Do-It-Yourself Eco-Machine are now available on our YouTube channel. Please, click here for the Hanging Lamp Instructions. You will find the Table Lamp Instructions under this link. The cardboard elements can be picked up at the museum till September the 8th, 2013. Enjoy making your own Eco-Machine!

Aleksandra Jaeschke and Andrea Di Stefano are proud to announce the first solo exhibition of AION works which will open on July, 18th in the Wroclaw Museum of Architecture in Poland. The featured projects are set within the context of the Paper Dragon spatial installation which will soon be presented on our site. The exhibition catalogue will be launched on the opening day. More info coming soon… The instructions on how to make a Do-It-Yourself Eco-Machine will be available here next week! 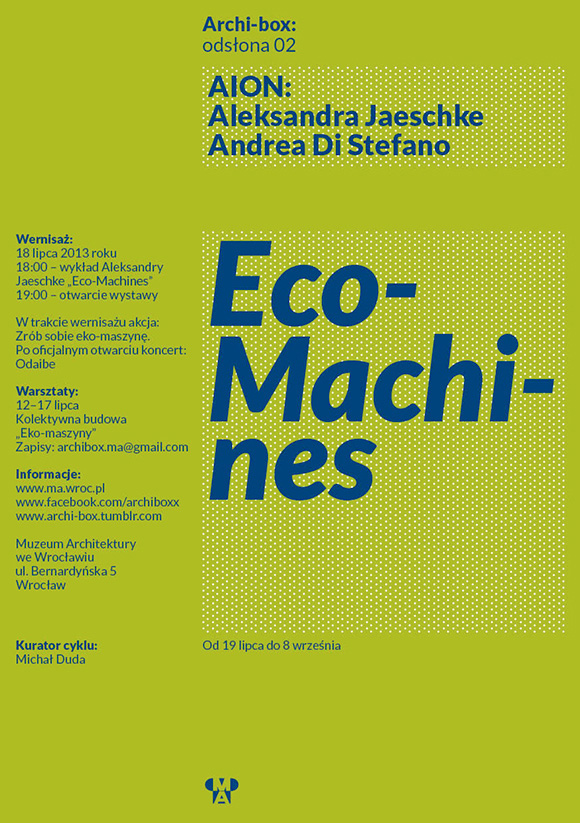 Studio Aion is among the offices featured in IoArch – Speciale Sicilia, a special IoArch issue dedicated to contemporary architecture in Sicily. The two pages article presents our project i Ramarri. For more information click here. 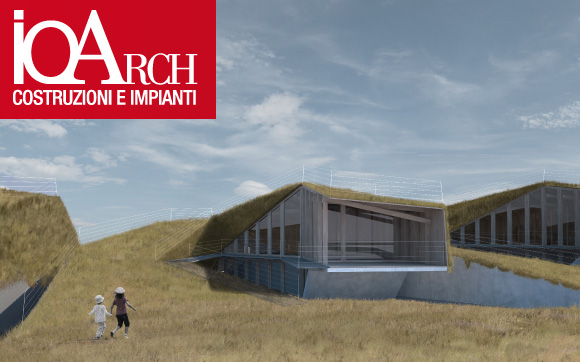 The Polish online magazine.o.pl features an interview with Aleksandra Jaeschke. The conversation focuses on some of the issues discussed during the conference and public debate which were part of the WROCLOVE Design Festival. 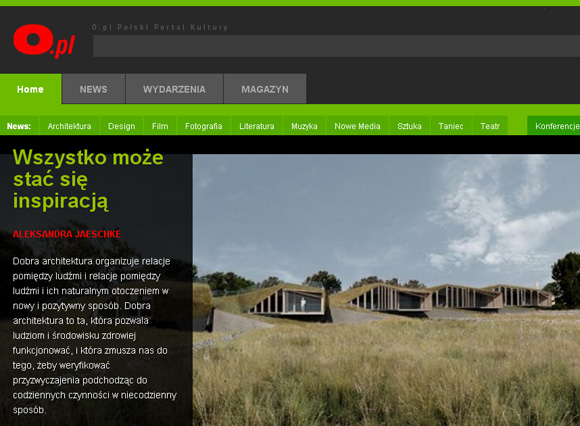 Studio Aion will present its work at NIB ARCTEC – a series of events organised by NEWITALIANBLOOD and taking place in Salerno from May,15 till June,30 2013. The exhibition STATI GENERALI NIB collects the work of the winners of 5 consecutive editions of the NEW ITALIAN BLOOD TOP 10 Under 36 Award. It will open on June, the 7th. Please, click here for more info.

Andrea Di Stefano will present the work of Studio AION at Crossing Borders, the Architecture Days Festival 2013 which will take place in Cluj Napoca, Romania, between the 15th and the 19th of May. The lecture, entitled Eco-machines, will focus on relational ecologies and integral design strategies for the built environment. Andrea Di Stefano will also participate to the public debate Digital Architecture and Amara’s Law, with Dr. Chris Williams from Bath University. For more information click here. 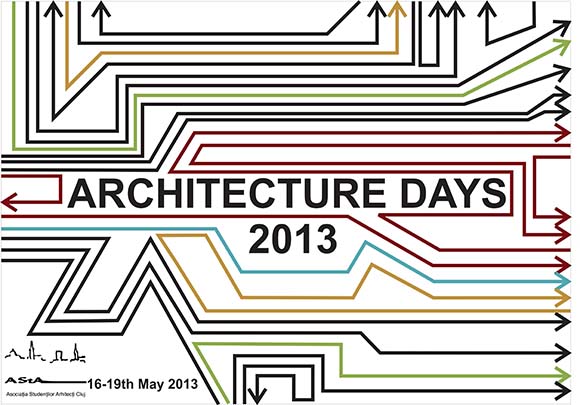 Please click here to see La Spicola – the origami cardboard table designed during a workshop at the HUB Siracusa. The project was sponsored by International Paper, Catania and by Impronta Team from Siracusa.

Aleksandra Jaeschke will present the work of Studio AION at the International Festival of Good Projects – WrocLOVE Design. The lecture will take place on May, 11th at 2.30 pm in Sala 2 at the Hala Stulecia in Wrocław. The event is part of the “Active and Creative Polish People in Europe” project which promotes Polish achievements in Europe and connects Polish artists living abroad.

The festival programme can be downloaded following this link. 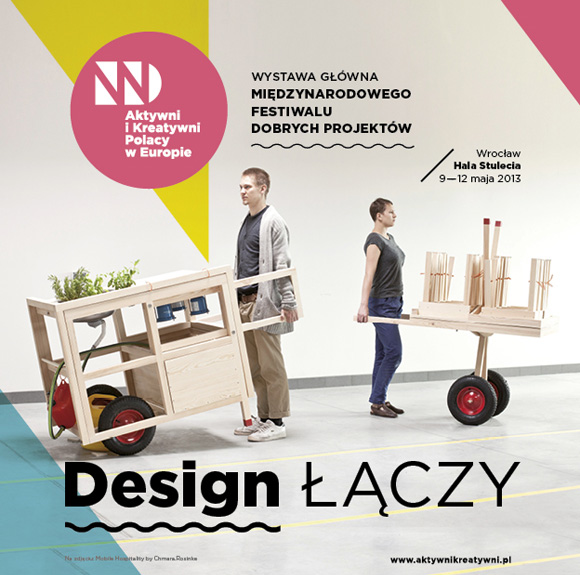 Parametrico Nostrano edited by Giovanni Corbellini and Cecilia Morassi and published by LetteraVentidue is now in the bookshops. The volume is the outcome of a workshop organized by Giovanni Corbellini in Gorizia in 2012. The PAPER FIELDS workshop organized by Studio AION is featured together with work produced by students guided by Co-de-iT, Disguincio&co and ecoLogicStudio. The volume also includes short essays on parametric design.

An extract can be viewed here. 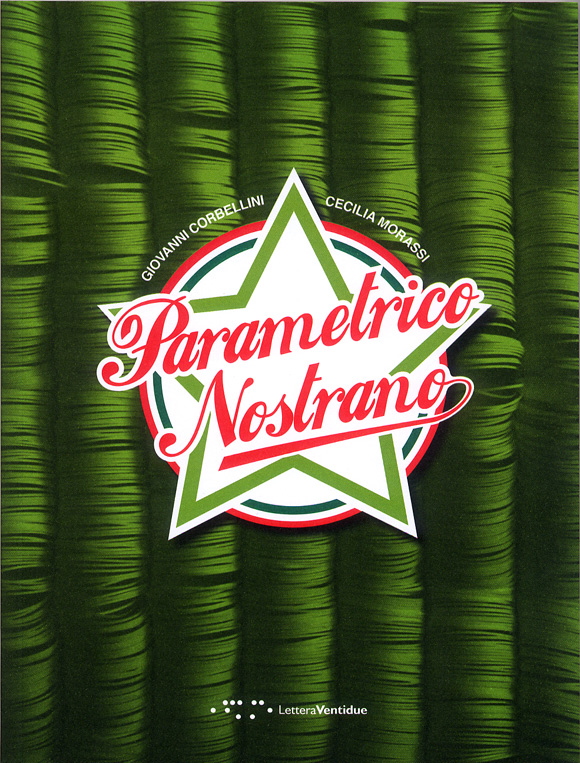 Andrea Di Stefano will run a workshop with the students of the Atelier Cabay, École Spéciale d’Architecture, Paris. The workshop is organised in collaboration with AION and will take place from 27th to the 30th of March in the Terramar Car Racing Circuit in Sitges, Spain.

The latest issue of the Italian magazine Tracce features Plemmirio. The full article can be viewed on the magazine website. 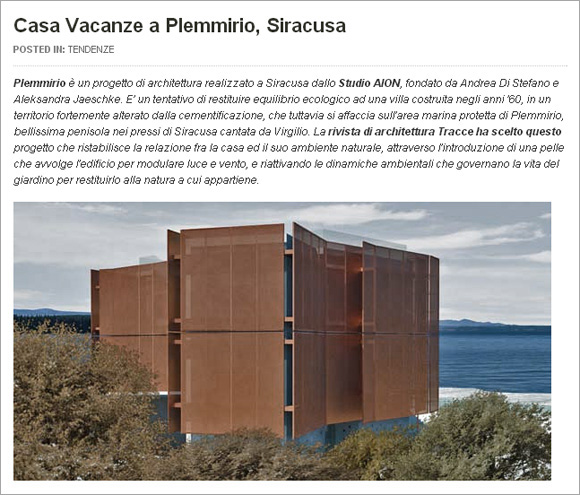 “Cupole per Abitare” in now out! The book edited by Luigi Alini and published by Libellula Edizioni will be soon available in the bookshops. In the meantime you can read an extract from the book on-line.

The publication presents the Dome project developed by Luigi Alini and AION together with the II Year Students from the Faculty of Architecture in Siracusa.

A short video presenting the construction process can be viewed here. 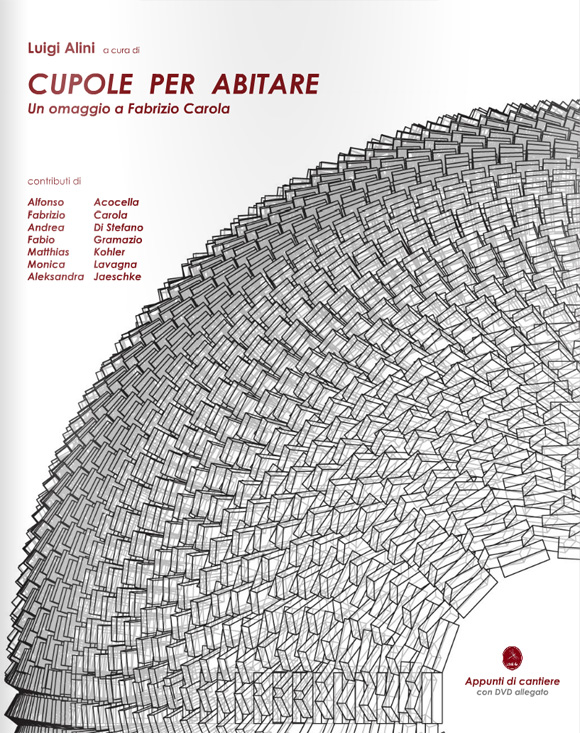